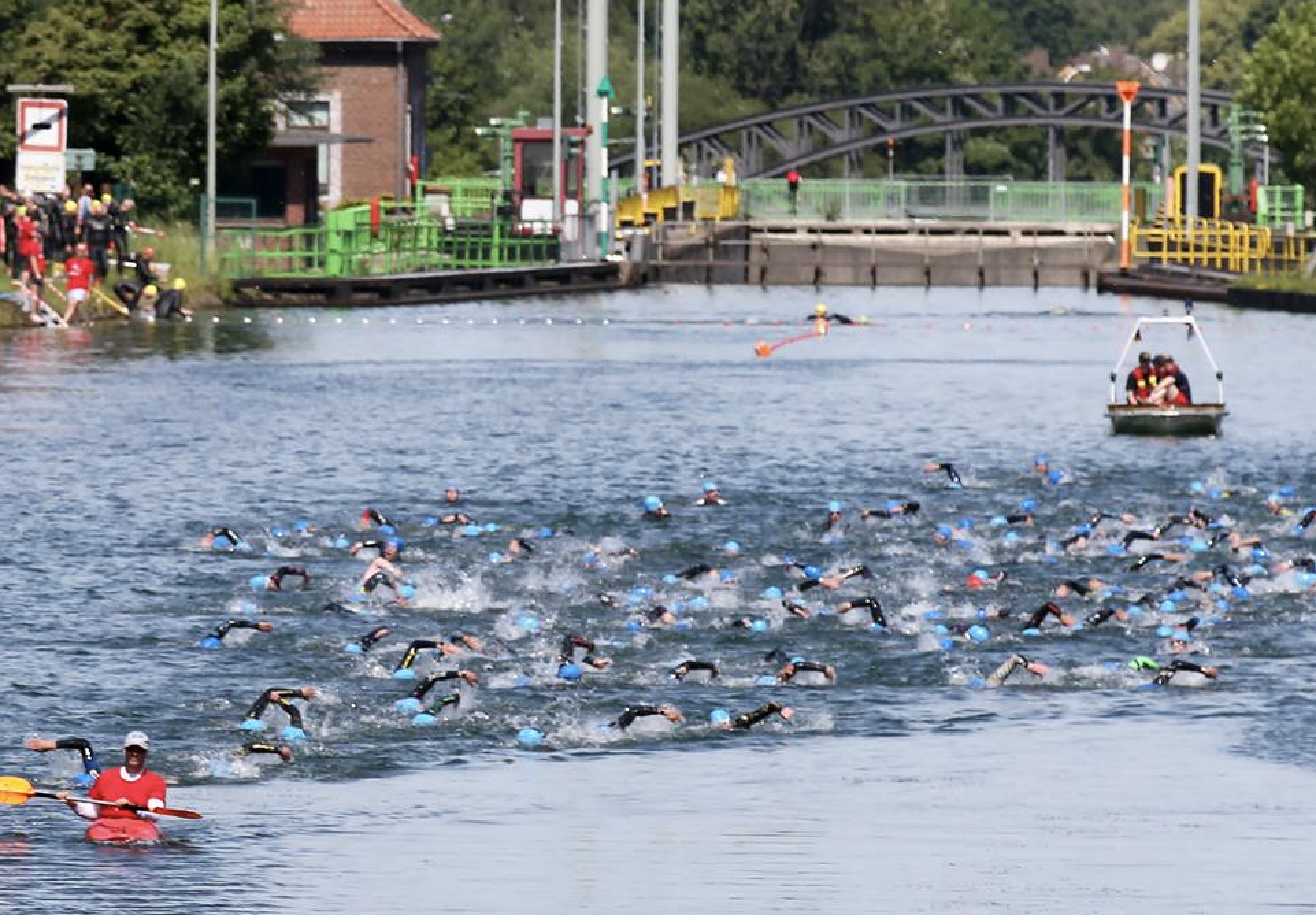 On 1.6.2019 a Saturday morning 2 weeks after the Ironman 70.3 in Calella/Barcelona I was surfing triathlon sites for nearby events. Found out that at that weekend also the Wasserstadt Triathlon was taking place with race distances such as 70.3 & 140.6.

I spontaneously decided to take part at the sunday race (2.6.2019). Compared to the half and long distance Ironman races the price was a bargain. Not sure what distance I would like to race, I just prepared my triathlon gear and food in an hour and rushed to the train taking my bike with me. Düsseldorf Main station was very busy and long lines at the ticket counters, after getting some information on how to transport my bike with me, bought my ticket and waited for the train to arrive at the station. 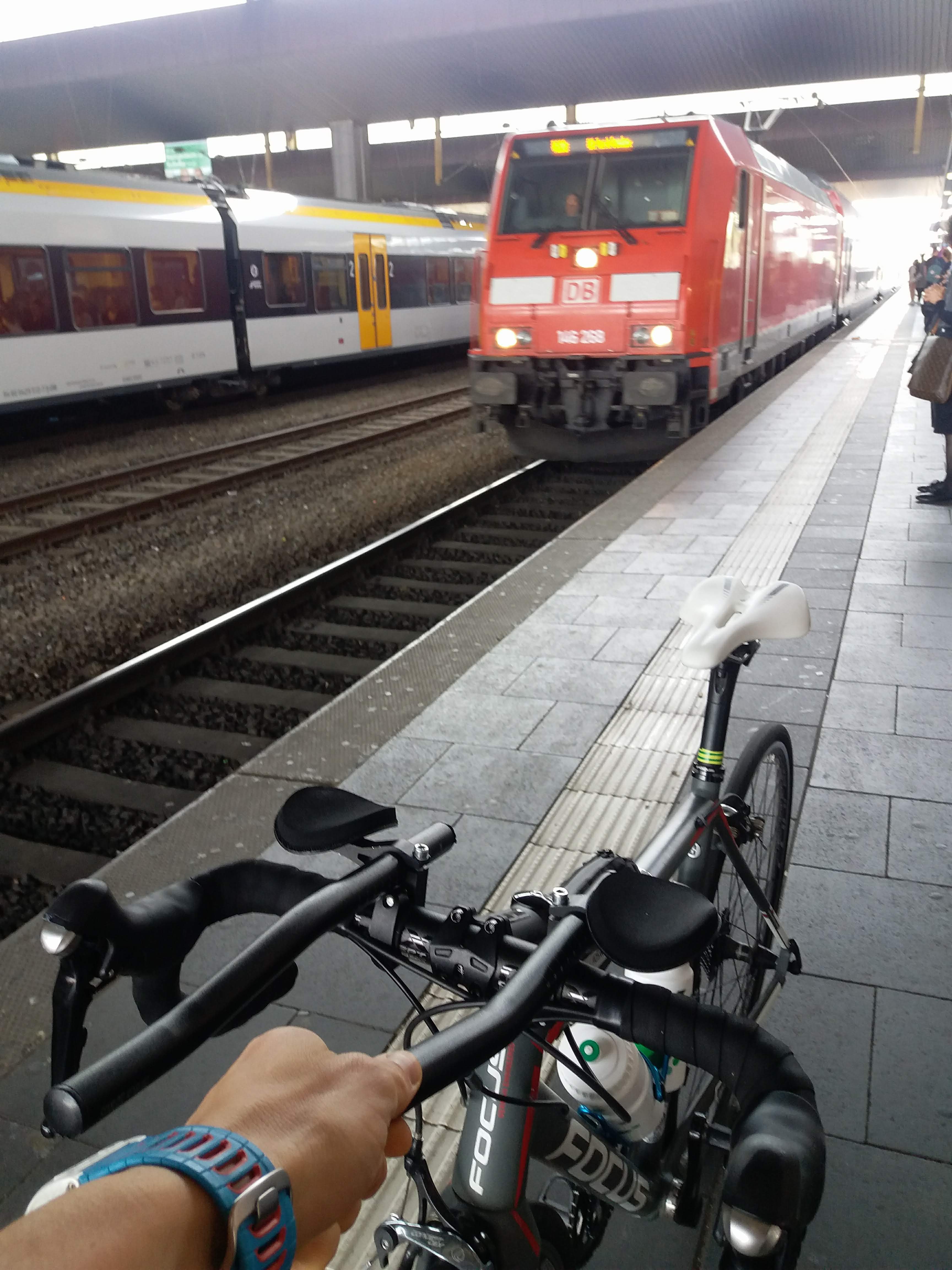 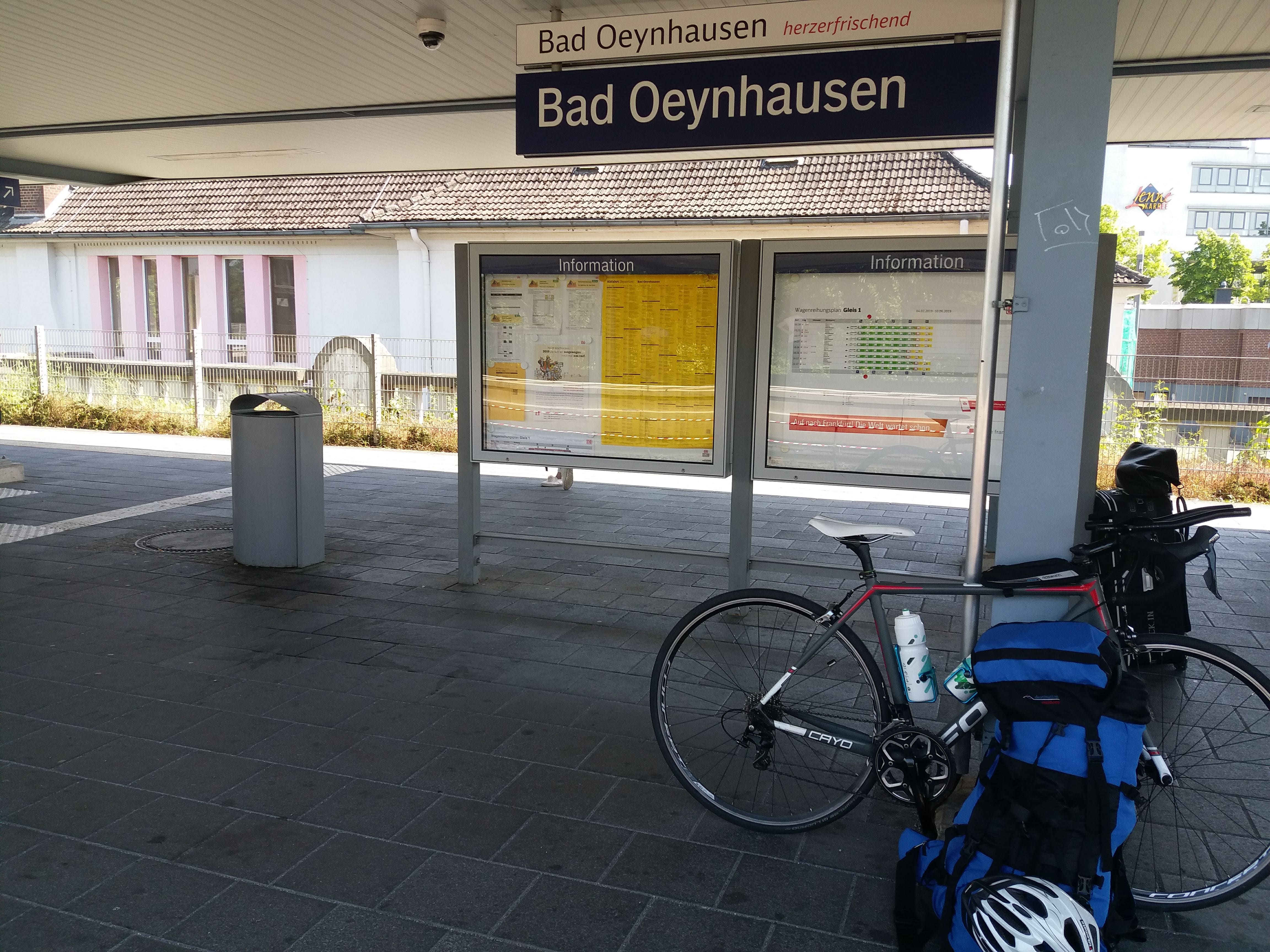 Arrived at Hannover, checked in at the hotel put the smoothies into self made cooler 😀 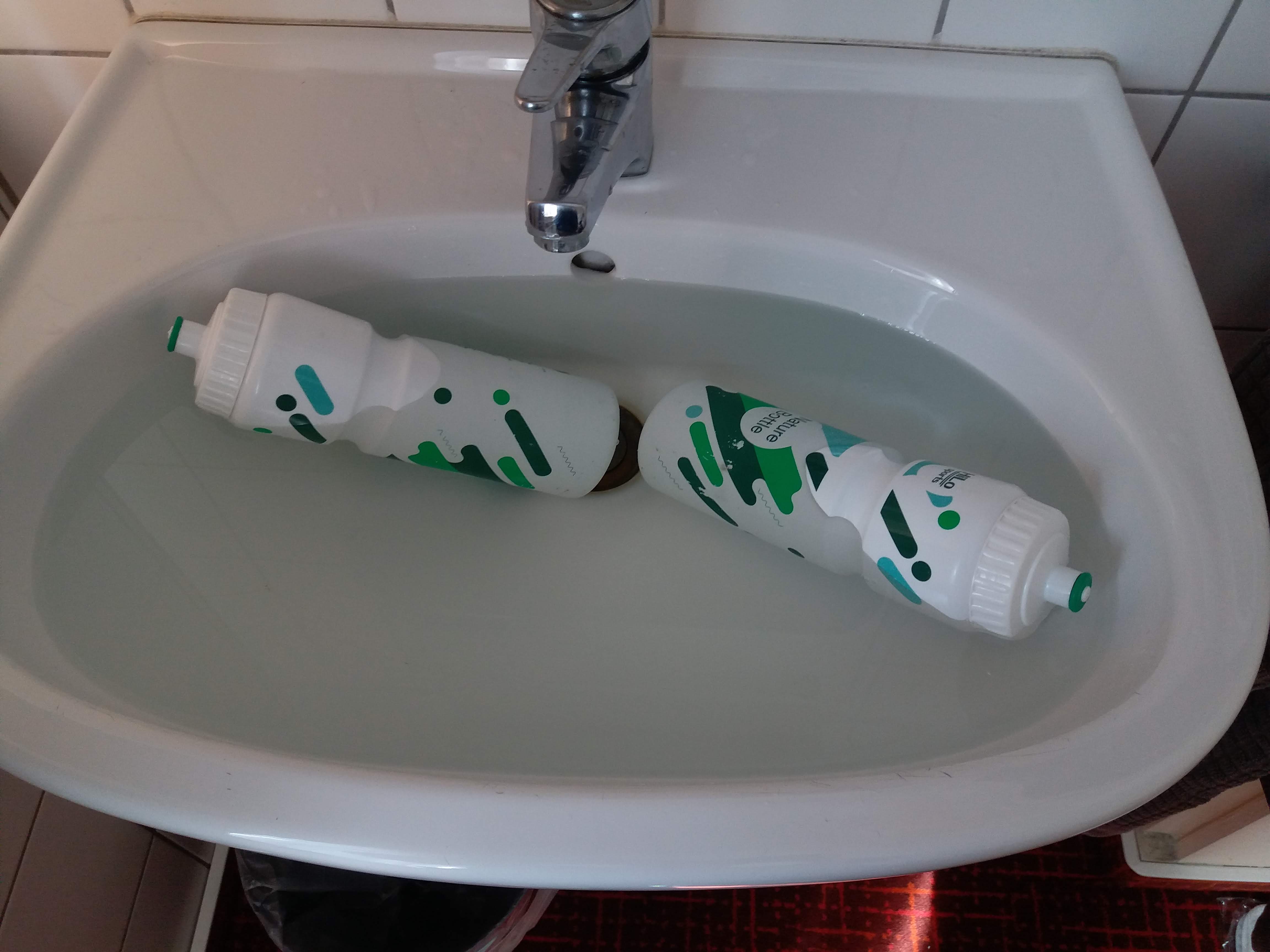 Rushed to the Triathlon “village” at TSV Limmer and got to the registration desk, before it closed. The lady at the registration asked me what distance I would like to participate and after a few seconds of silence, I said: “Iron distance”, she looked at me for a brief moment and said ok, just pay the amount here and then gave me my registration number and timing chip. I still tried to cope with the idea that I had registered to a iron distance triathlon, I ony “trained” on myself for a half ironman a few months, completed two weeks ago and was definitly not ready for such a long race, at least that was my thinking at that time.

Checked out the facilities, talked to a few other participants and took some photos. After the race briefing I felt tired from all the excitment and made my way immediately to the hotel. 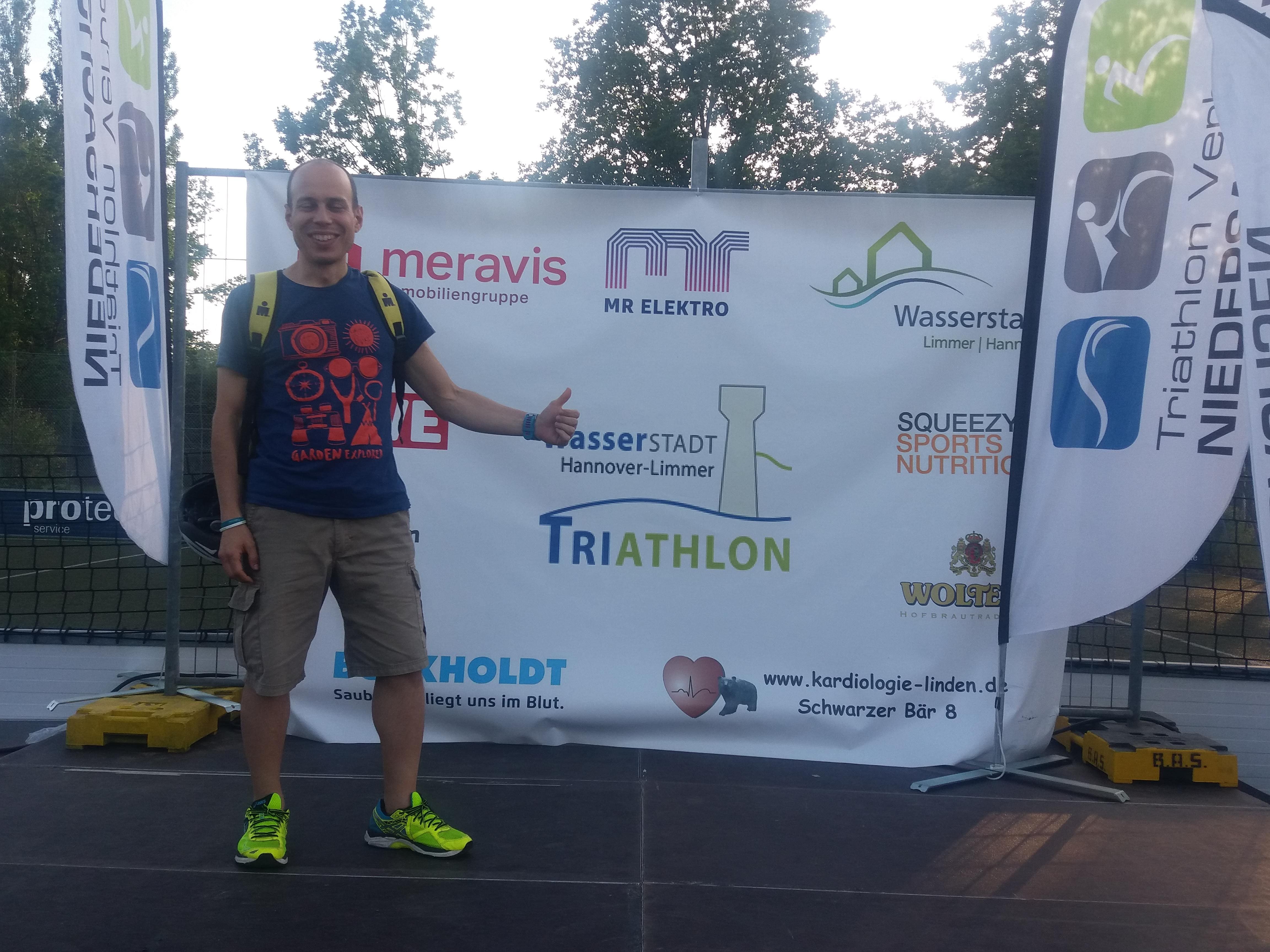 Race Day: Could not sleep very well and had some dreams about not waking up and missing the start of triathlon. Finally woke up at 4:30 got ready, checked my stuff and got on the bike to the transition area to check in my bike. 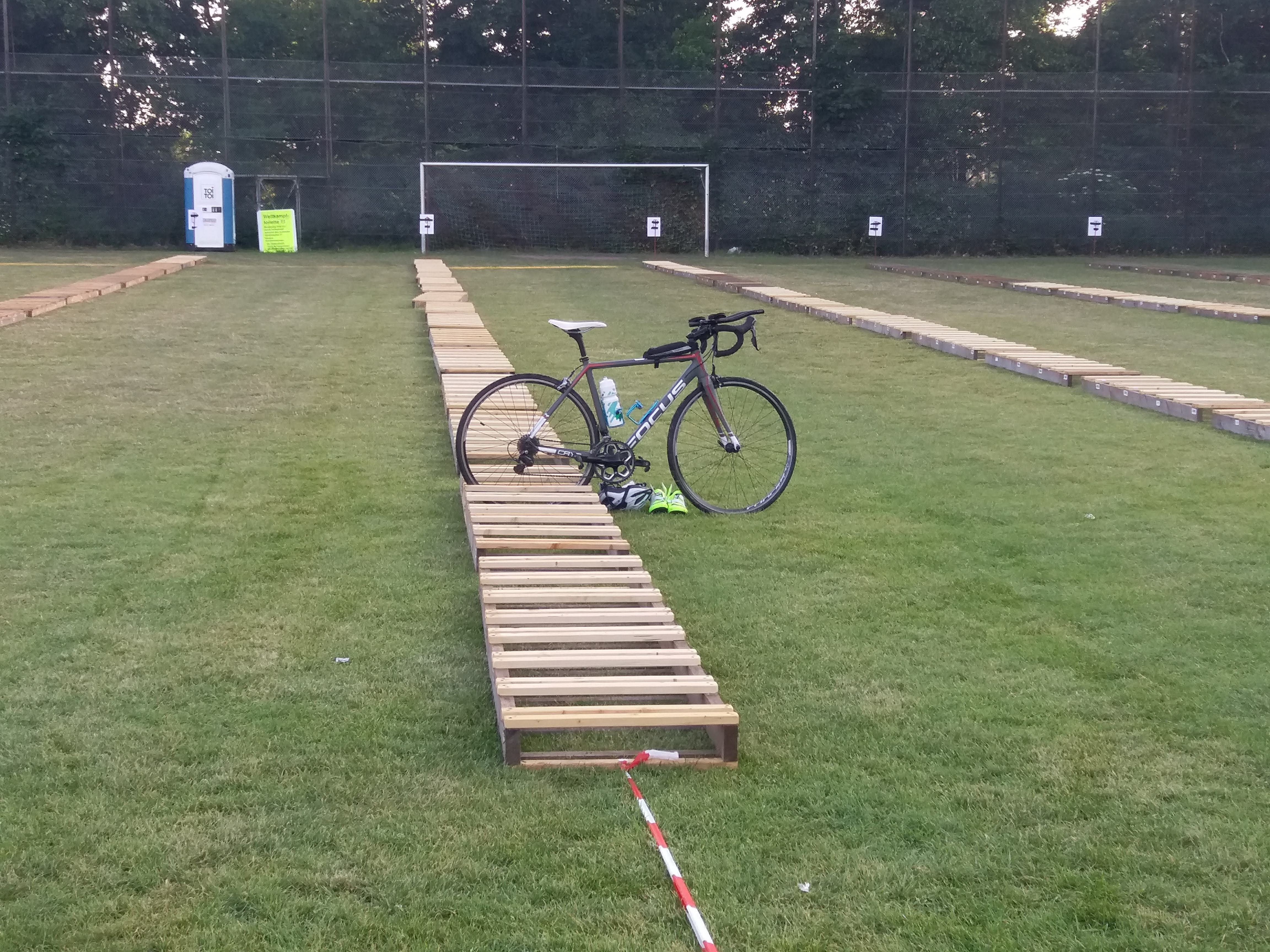 Everything went smoothly, put my stuff to the transition area. 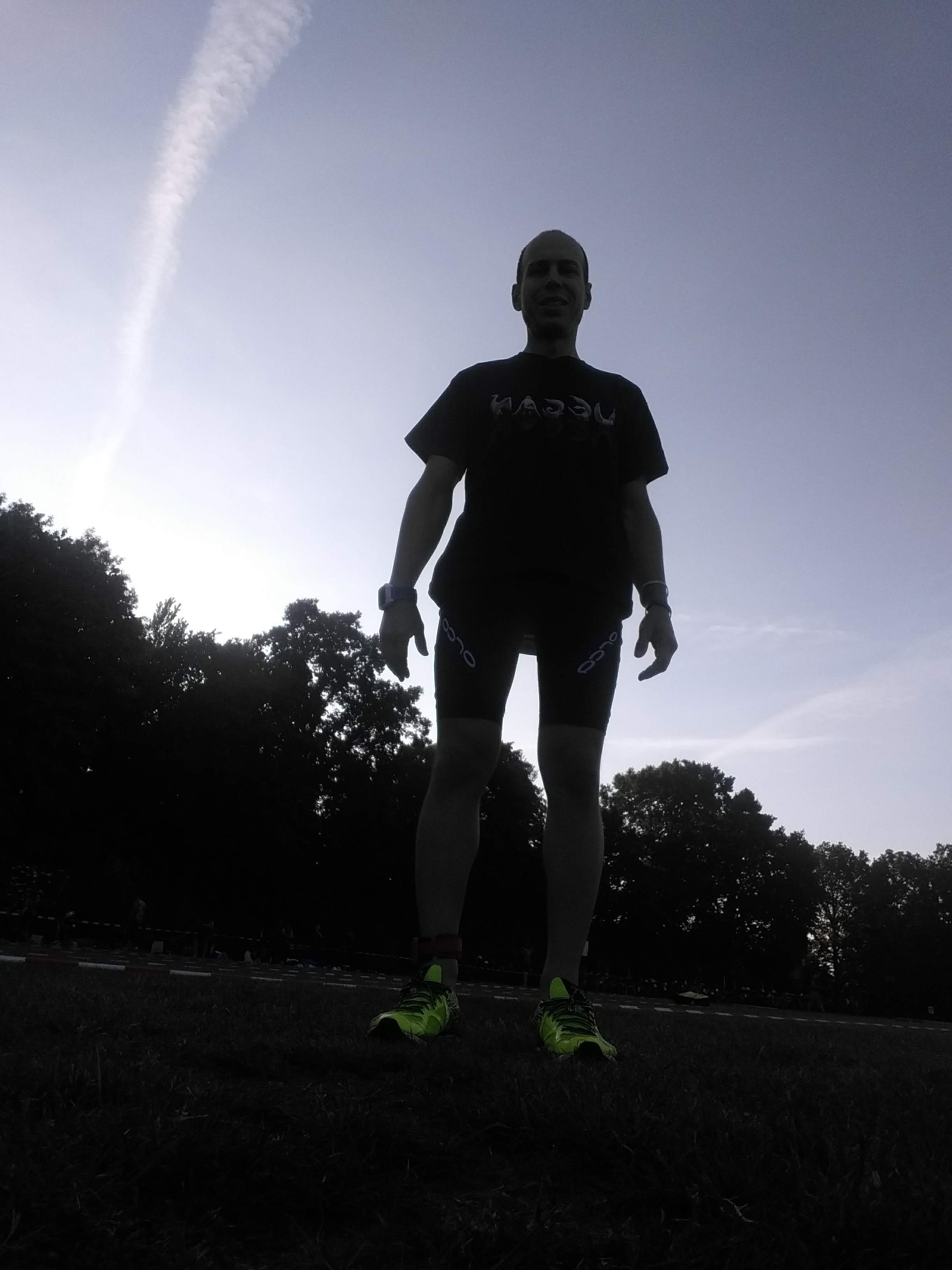 Last photo with onesei and t-shirt before puting on my swimsuite.

I got into my swimsuite and walked to the canal where the swim was about to begin.

Note about fasting: Had no plans to race after Barcelona and fasted from Monday 27.05. till Thursday 30.05.2019, started eating on Thursday. On Saturday I ate only raw foods, mostly fruits during the day and a salad with tomatoes and avocado on the evening.

Race Nutrition: Woke up at the middle of the night at 2:30 am, ate an orange. Morning at 5:00 am ate another orange and cooked beetroots.

Before the swim I had a few sips of my home prepared smoothie (50g of dates, 100g sesame, tap water, 2 bottles, 750 ml each) and after the swim, at the transition area. During biking, mostly dried plums approximately 100g. Every round (6 rounds of 30 km) half of a small banana and 2 medjool dates at the last 2 laps. A few sips of Iso drink and finished a full bottle of my smoothie. Before the run, during transition I had again few sips of my smoothie and by that time, the bottle was half empty. During the run, 5 small half bananas, 200 ml of coke, 4 medjool dates. After the run on the finish line 300g of watermelon and a few sips of non alcoholic beer. 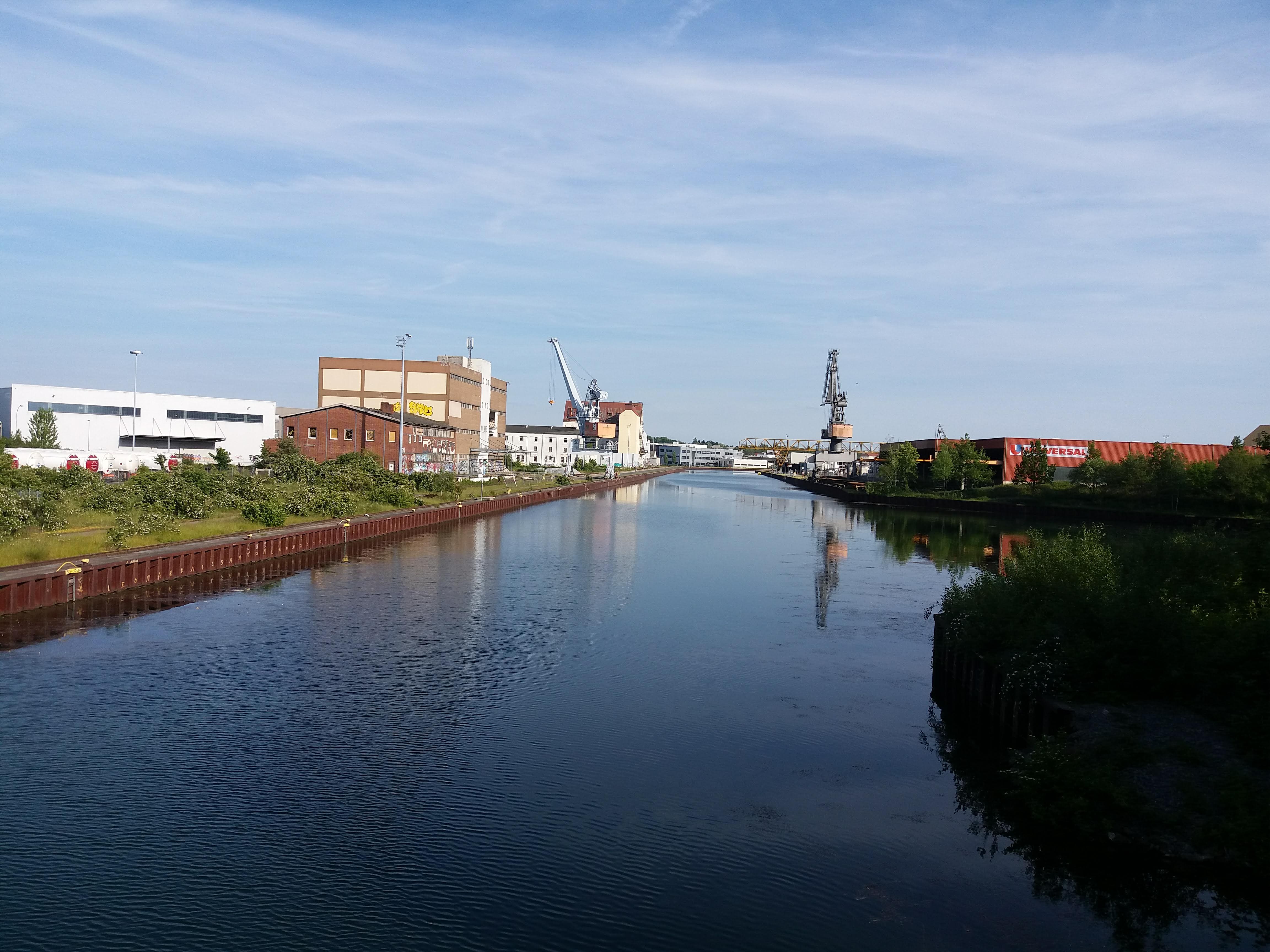 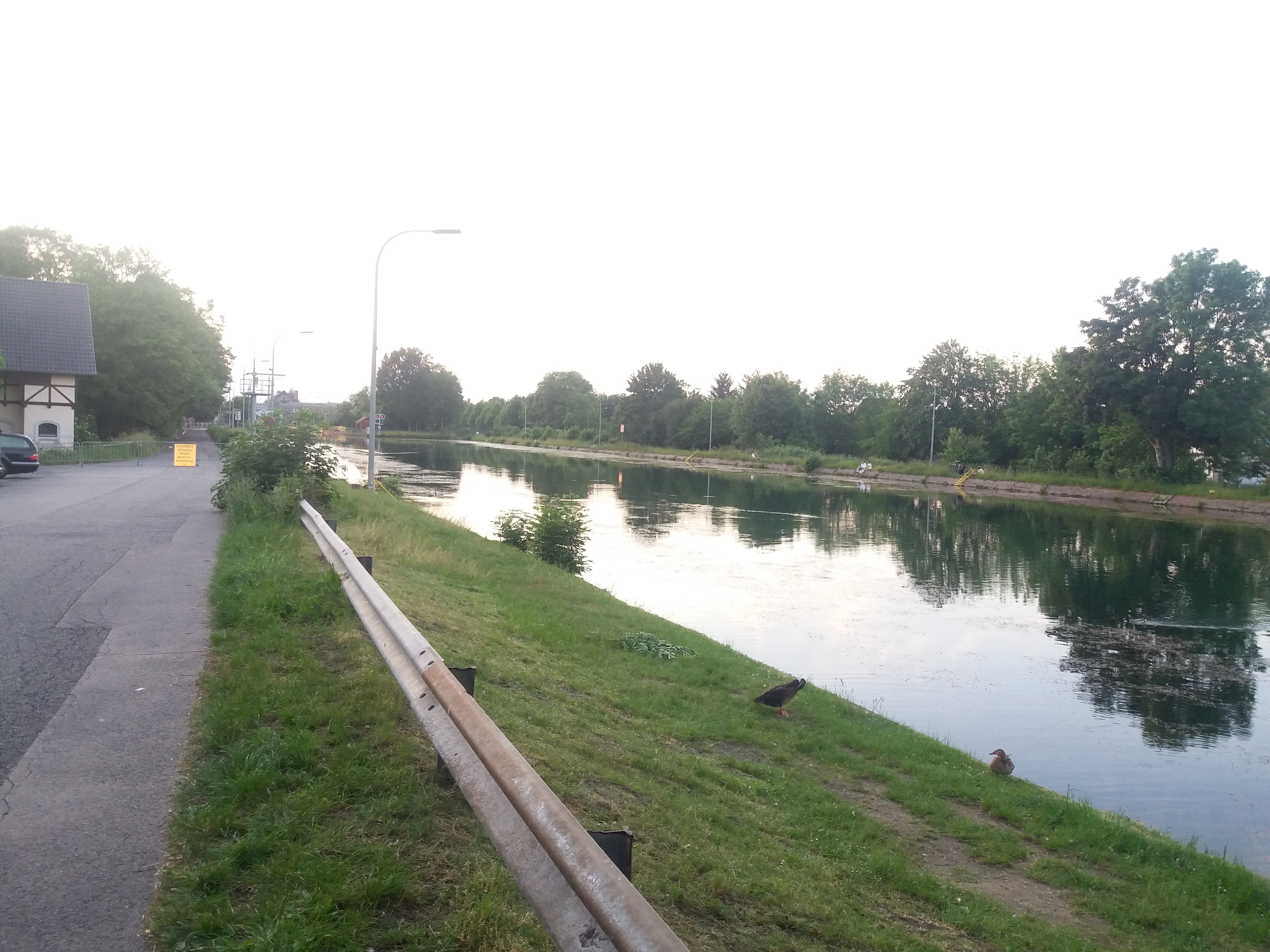 We did the swimming in this industrial canals.

At 7:00 we started the 3.8 km swim, 2 rounds of a straight swim course. Water temperature was cold but bearable. Was looking at my watch and saw crossing the 2.5 km mark, my longest continuous swim to that date. Could keep up the speed and after the final turn just before 950m before the finish my right calf cramped. Stopped for a few seconds, started again slowly and was breathing into the pain and hurting muscle. After a few minutes the cramp was gone and very little pain remained that also disappeared till the finish line. Crossed the finish line after 1:26h.

Transition 1: Got out of the water a little dizzy, walked and than run to the transition area, sipped my home prepared energy smoothie, changed to my bike gear and started riding.

Bike: It was a fast track with very few ascents and long, non technical parts, so I was using mostly the aero bars. Had to ride the 30km course six times in order to complete the 180 km long bike ride. 3 rounds and 90km into the ride the sun was getting very intense and I forgot to put my sun cream on at the transition. Also the headwind was getting stronger. After 5 hours and 4 rounds I had enough, had severe sun burns and thoughts about quitting creeped in. Concentrated on my breathing and the beautiful landscape, got my motivation back and pushed forward. Was very happy finishing the long bike ride of 7:16 hours. 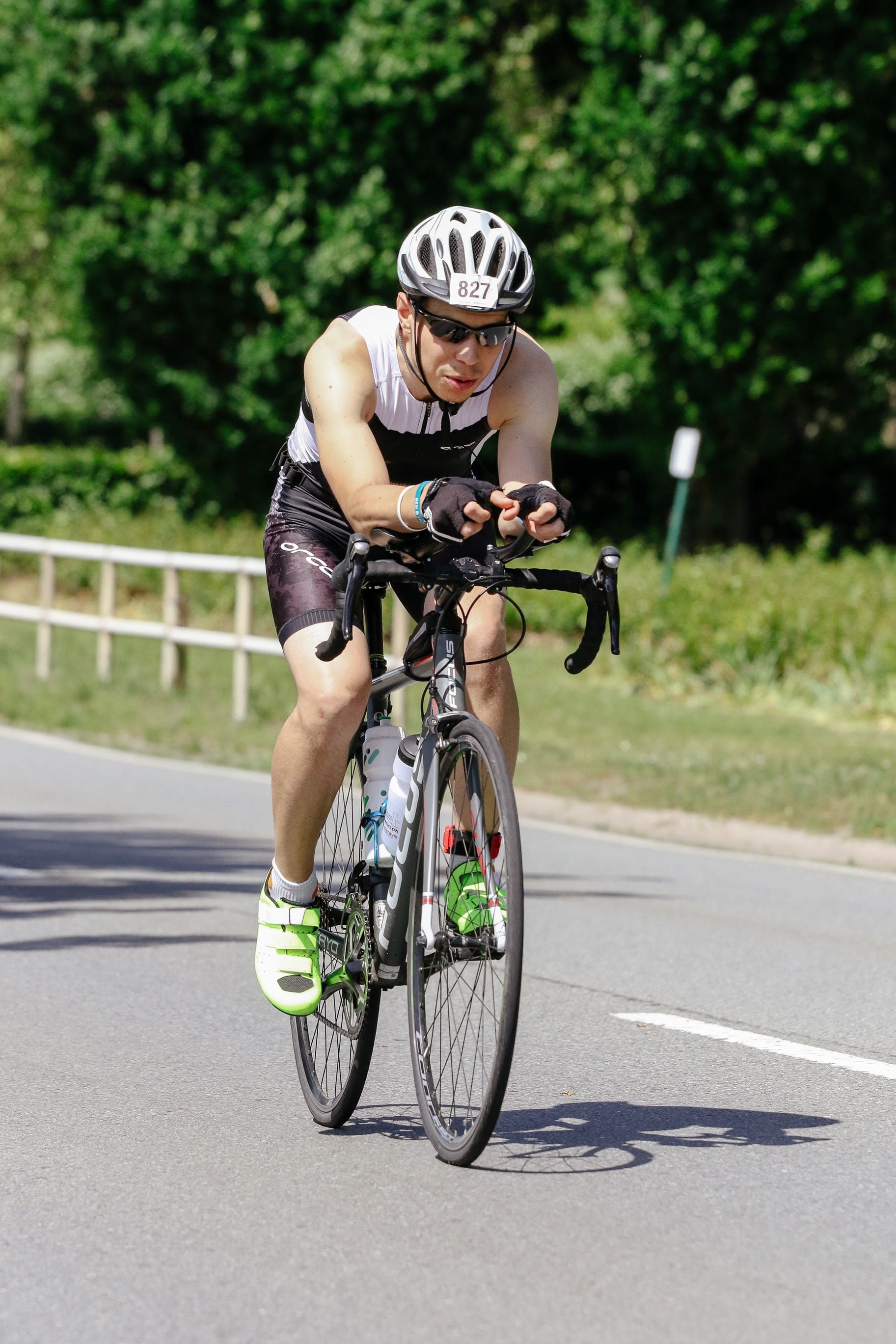 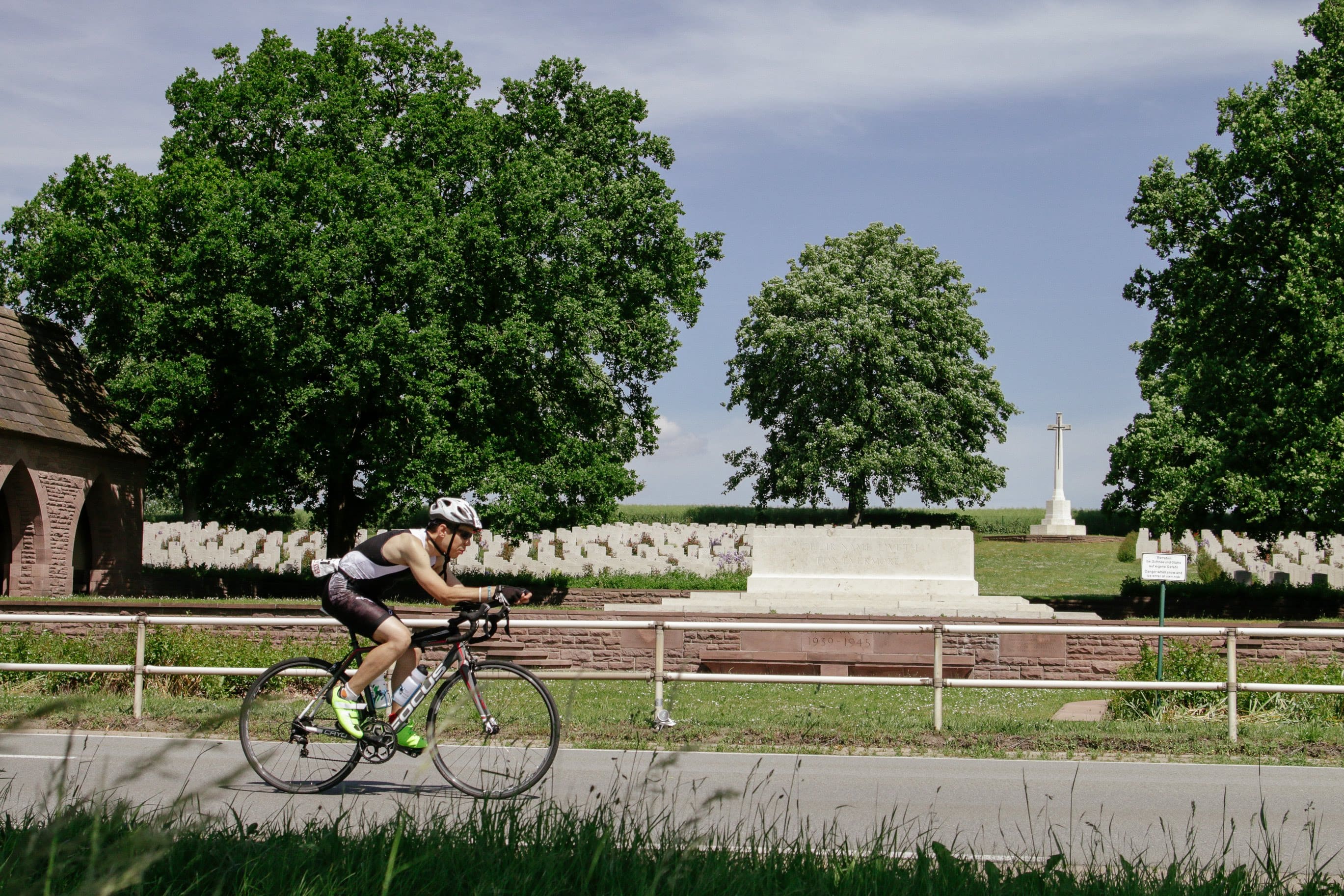 Grinding on the bike.

Transition 2: Put immediately some sun cream on, put on my running shoes and gear, sipped a little from my dates and water smoothie and started slowly jogging out of the transition area.

Run: Had Overall fatigue and my leg muscles felt really tired. Had no idea how the run the 42km after non stop swimming and riding the bike for total of 9 hour. Decided to walk run, and just to concentrate on the next 1 km I had to complete and not the whole distance. For every 1 km completed I allowed myself to walk for 30 seconds, sometimes more while eating & drinking at the aid stations.

After 3-4 hours I was literally sleep running, my brain was shutting down, immediately started to eat dates that I had with me and the sugar boost woke me up. After that I tried to eat more bananas at the aid stations and also drank some coke. At the last lap, after 5 hours, Atilla caught up, introduced himself, joined me and it went easier from that point onwards. We talked till the finish line, motivated each other and finished together at the 14 hours and 33 minutes mark. 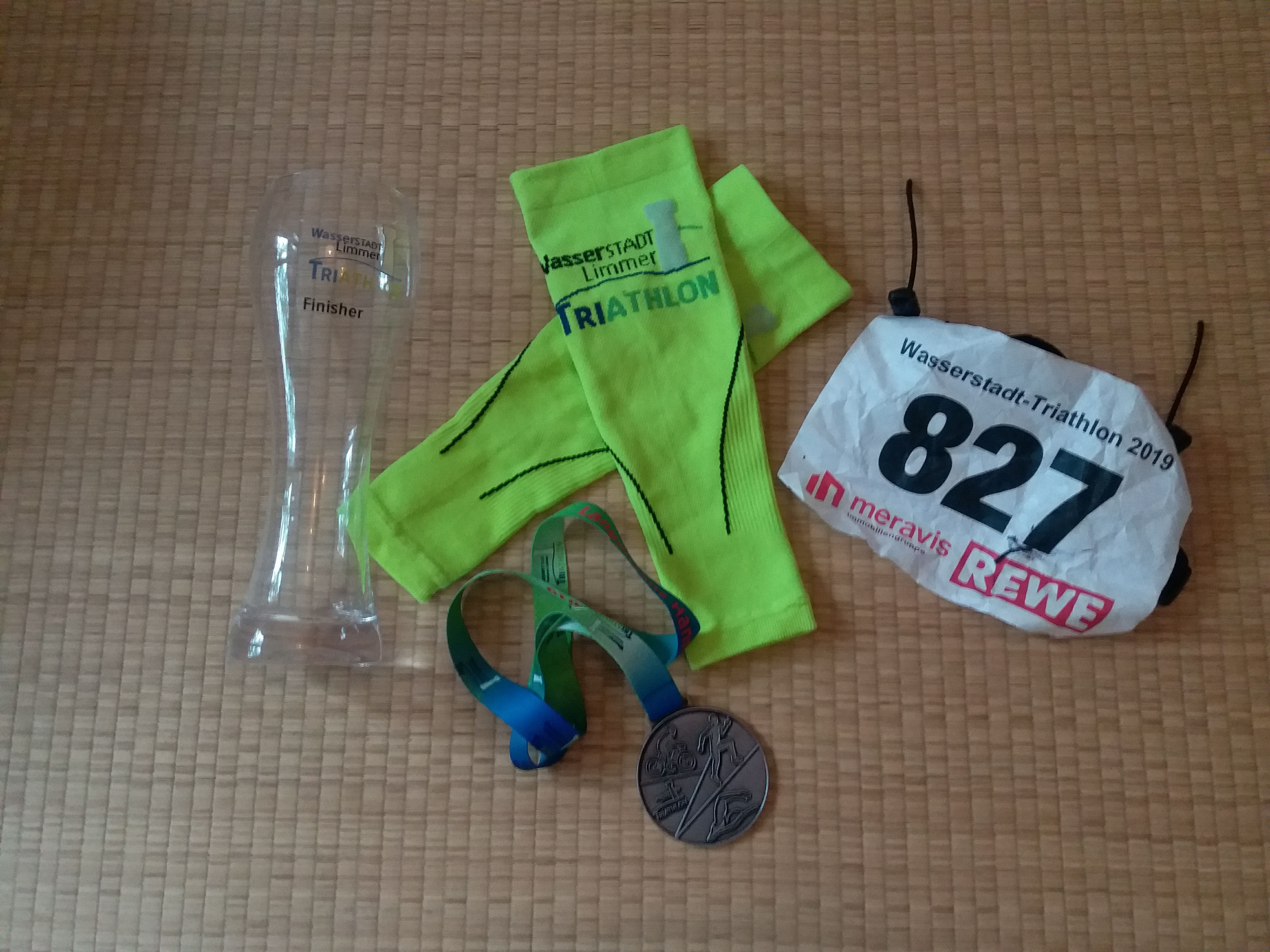 Thanks to all who supported me, espically my partner in life, without her this would not be possible. (and of course thanks the bird that shit on me during the bike ride, guess, you just need all the luck you can get).

Share
Tweet
Share
Save
Donate
« Help us mighty AI Bretzel Ultra Tri Colmar - Triple Iron Distance Continuous »
Some facts about (9) factasticgirl (9) AI Guy (37) Running (5) To be continued (6) Triathlon (6) Nutrition (1)
We would like to use third party cookies and scripts to improve the functionality of this website.ApproveNo, thanks