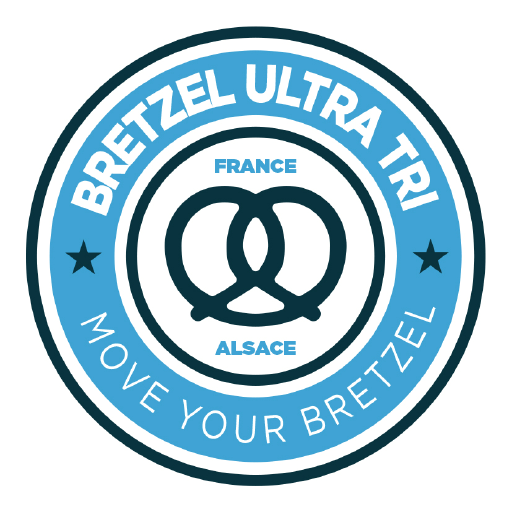 On Wednesday we woke up at the Rives de la Fecht residence, biked to the Bretzel Ultra Tri Village the long way around to test the bike course. After arriving there, I got the support tent from the Race Director, Laurent, and set it up near the start/finish line. 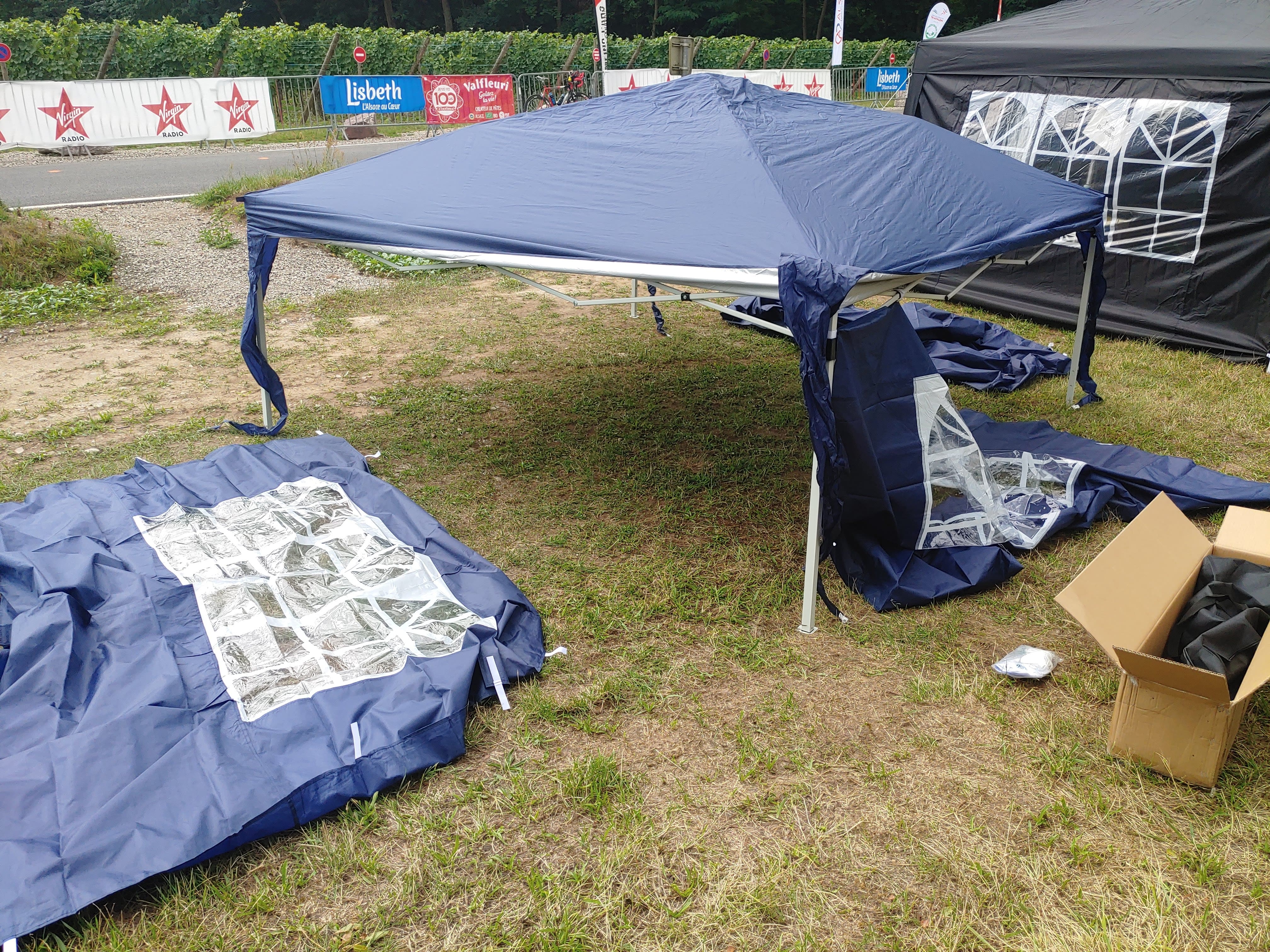 There were no vegan meals available, mostly due to my last minute registration; so we bought some groceries to cook meals, some fruit and sweet stuff. After that we went to Decathlon to get some rain proof bike gloves but they had only windproof ones and also bought some camping cutlery.

After bringing my partner back to the hotel, she wanted to stay there to prepare some meals for the race, I went to the race briefing by bike. She arrived at the second half of the race briefing with some freshly cooked meals, I ate all of it while the other competitors were getting impatient with an empty stomach listening to the briefing and got some nasty looks, while chomping the food down. After the race brifing ended, ate some pasta and carrot salad from the buffet. The day was definitly tiresome and we departed early to walk to the hotel.

I organized my swimming and transition clothes for the next day, prepared the things that I needed to set up at the support tent. We brought everything from food to biking gear, running clothes, sleeping bag and whatnot by car to the tent, as we wanted not to disturb the ongoing quintuple race and enter the closed road to bretzel village, we decided to drive an alternative road, that ended in the smal field roads of wine yards, it felt eery but also very beautiful and romantic as the moonshine iluminated the endless wine yard. tried to organize it for self support and left around 23:00 to the hotel.

Thursday morning I remembered some stuff that I needed from the support tent, like more gels for the swim and rode my bike first to the Bretzel Village and then to the Swimming pool with my swimming and transition gear in my backpack. Unfortunately some of the roads to the swimming pool that google suggested were field and gravel roads and definitely not suited for a Cervelo P3 bike. So I walked my bike through the rough parts. Arrived around 13:00 exactly at the same time with the Transport from the hotel that was bringing some other competitors and Gökcen to the pool. Got to chat with other fellow triathletes, we wished each other luck and got into our swimming suits. I put my nutrition and water to the opposite side of the lap counters.

At 14:00 we started with the swim. The Triple was just 4 people, the first two Cricri and Anthony were very fast, Clement and I, had at the beginning almost the same speed. So the first two completed the swim much earlier and also Clement was around 20 minutes faster than me. I ate almost all the nutrition, 4 gels, 3 bananas an orange, 1 cliff bar during the swim and tried to finish at least 700ml of water during my 5 hour swim while doing very short breaks, 1-2 minutes around every 2000 meters. After 4 hours it started to rain and lasted with some pauses till the next day around 11:00 o clock. My swim time could easily be around 4 hours 30 minutes, and I was wondering why it took my worst estimation. After seeing the videos of my swim, my freestyle crawling really sucked. All the time crossing over on hand entry.

After the swim my partner helped me out of my swimsuit and I hopped into my biking gear while doing the T1 I ate another banana, put the rest of the gels and another clif bar into my bike tricot. We drove with the guide to the bike course, during the bumpy ride my chain got stuck while switching gears and I lost sight of the guide in the middle of some wine fields. Fixed the chain and drove into the direction where I last saw him heading. Fortunately he was just waiting after the first curve and drove me to the bike course. We did the first lap together and he drove to the mobile Cafe in the middle of the Bretzel Village just before the finish line. I had to do a total of 61 laps, one down, 60 to go.

I talked months before the race to my partner, that crewing is very hard and could put strain into relationships, decided that it’s not a good idea that she gets involved too much, better to bring some food and check how the race is going from time to time. So the first night I was on my own. As the rain started to intensify I had to stop and change into rain gear, put my rain protection above the shoes, ate some meal and went off the bike again. I could only see a few meters of road in front of me in the dark and heavy rain. Trying to ride with other bikers while keeping some distance, because of the rules. The lap count was getting smaller but I had to stop almost every other lap because of the self support situation, changing clothes, getting nutrition or filling the water bottles. Also the support tent was not holding well together because of the storm and had to drain the water that was accumulating above. Keeping the electric plug in the tent dry was also an issue. As the storm passed and the rain got weaker or sometimes stopped and started again. I had to change and adjust clothes, get into dried clothes and tried to keep my feet dry, that was almost an impossible task, as I had only took 1 pair of bike shoes 🤦 Had also some problems trying to charge my watch during the ride and rain, somehow it did not like that and turned of the activity tracking. In the end I got 3 separate activities for the same ride.

I encountered a fox family crossing the bike course and we had a close contact, and fortunately everyone involved survived it. Some small deer was also very eager and fast while crossing the bike road, fortunately nothing happened. Also during the morning hours I encountered two small wild hogs that panicked after seeing me and ran madly into the fencess, trying to find a hole, first few attempts were not fruitful. In the end they found it and ran away into the woods, relieved that they did not attack or hurt themselves I could continue my ride.

In the early morning hours I had only 4 gels and a few clif bars left. So I texted my partner around 7 or 8:00 to buy me some gels and bars and foot powder to keep my feet dry, as it was soaked during the night and definitely not ready to run when the time comes. She got in total 2 kilos of clif bars and 3 kilos of gels, don’t ask us why, it must have been the race excitement. I could probably survive, with that and the other food in the tent for a deca distance 😂 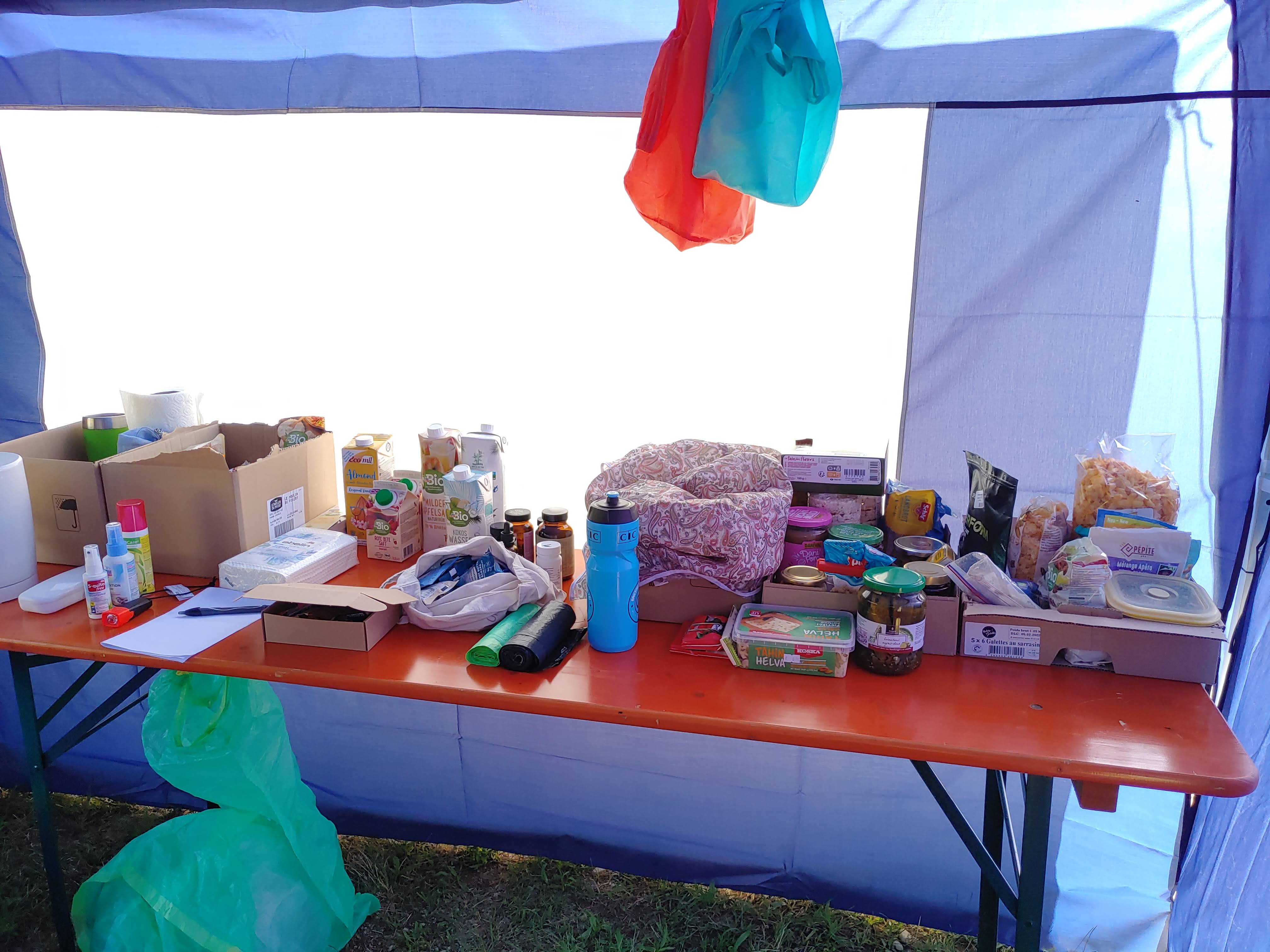 While waiting for my partner, I had found a better rhythm and was trying to ride as many laps as possible without getting off the bike. The longest break was probably the breakfast meal that morning. After she arrived I also put the new food into small plastic bags and ate it on the bike. I had the great fortune that my tires did not have a puncture during that night and the following day. In the end, it took me 27 hours to complete the 540 km. Finished the bike in the evening of friday, around 22:30 During the ride it was nice to encounter other athletes and exchange some quick words while passing each other. 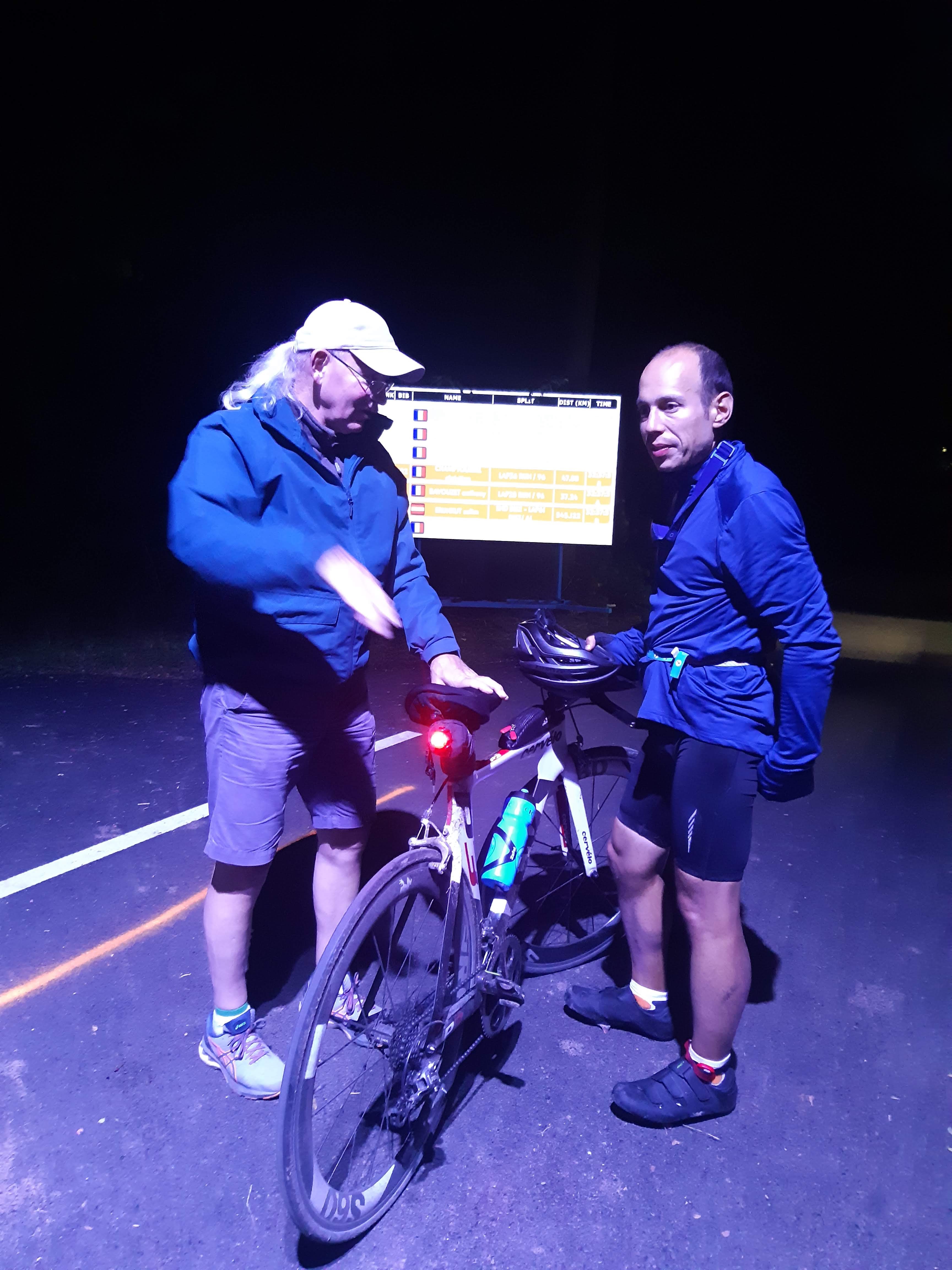 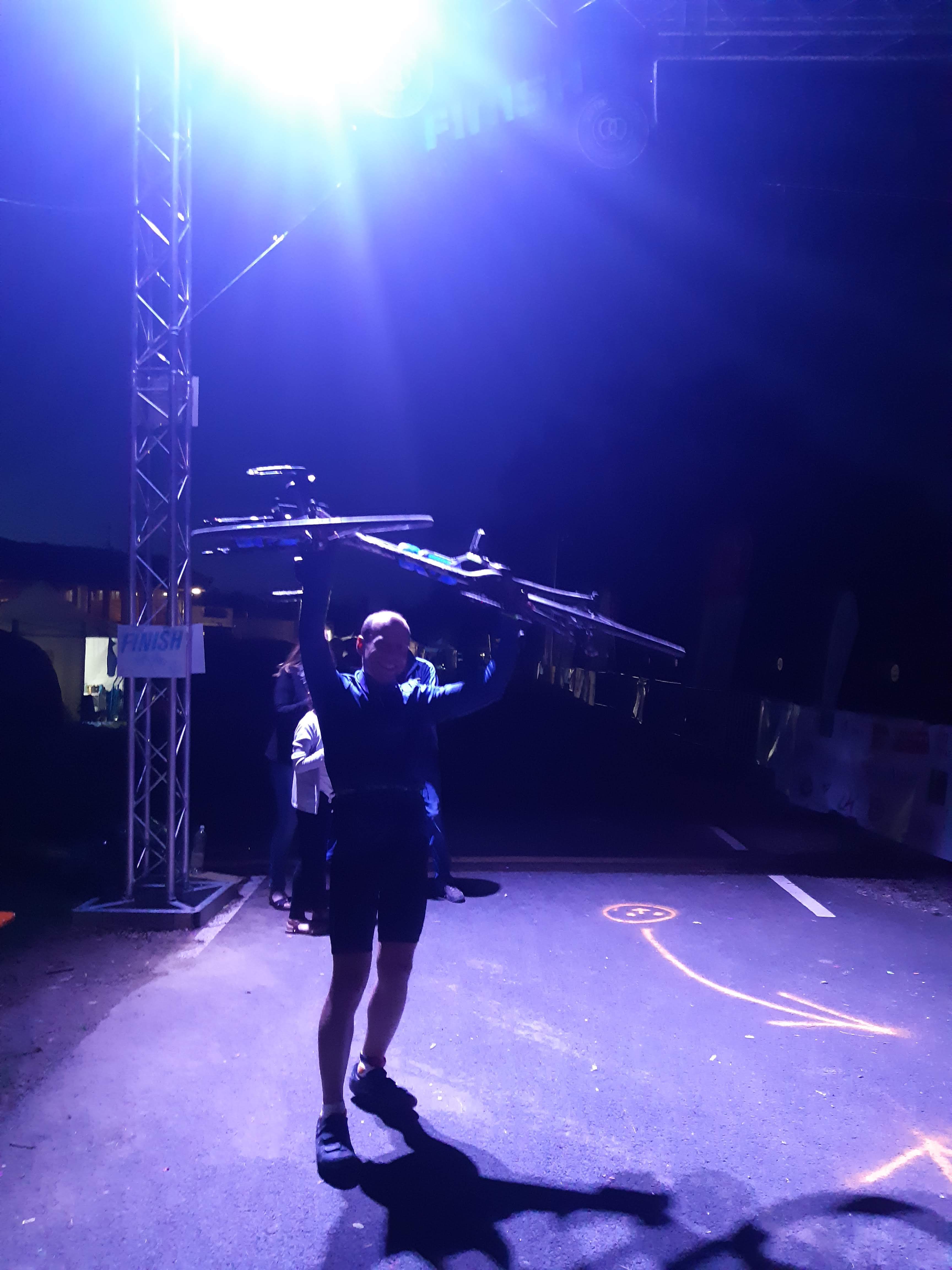 Off the bike, I went into the tent, back and knees were hurting, as I sat down, my partner tried to massage some oil to relieve the tension and I applied some cold spray to the knees and my ass, as both were hurting from the ride. Changed into running clothes, ate something and went running. The first lap was with my partner, she showed me the course; that was a very good idea, as I felt a little dizzy and trying to get acustomed to running, first lap was done, now I had an idea in what direction not to run 😀; 95 laps to go. The first 70 km felt very fast, it was a head to head race with Clement, another first time participant, sometimes he was faster and sometimes I. After the 75 km my legs cramped up and were very stiff, I could not really run and also fast walking was very difficult. A big mistake was going to the tent and trying to relax the legs and doing some black roll, as it did not help and I had lost valuable time. I also tried a massage with the physiotherapist there. Great guy, I felt no betterment, at first, so texted my coach and like before the race, he suggested the same mantra, and ultimate truth in ultra racing: “Just keep going”. 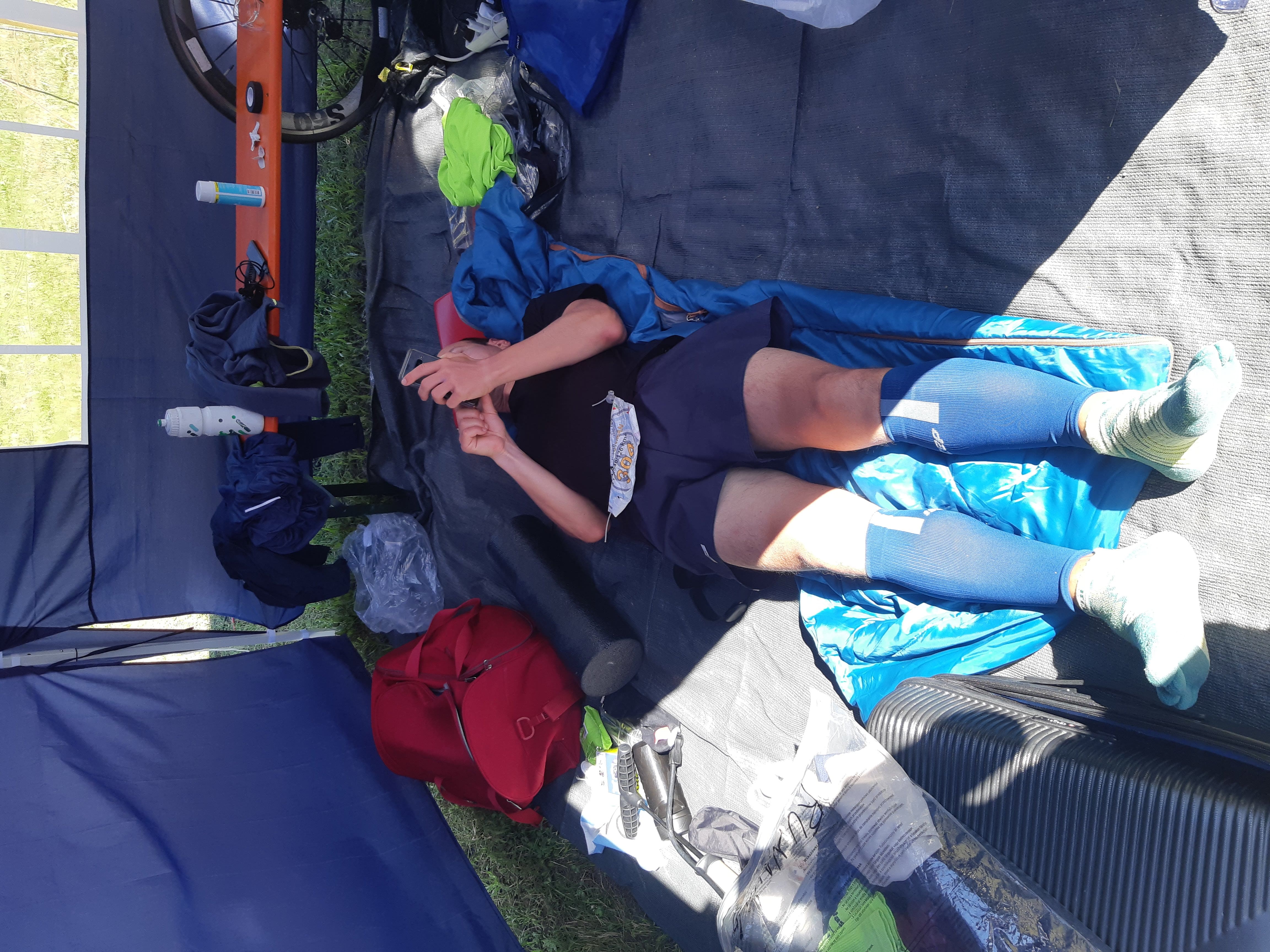 After a few hours my leg felt gradually better, I even could run a little, again I made the mistake of not pacing myself and going too fast and the legs started cramping again. I had 30 laps to go and Clement only 20. I had no way of getting third place from him, so my morale was not that good. So I kept going but very slowly.

Before the remaining 25 km I talked to my girlfriend, if she could run some of the laps with me, so she could encourage me to go faster and finish before 22:00 o’clock and sleep at a sensible time at the hotel 😀 We set up an average pace of 9 km per hour for the laps and I tried to keep it, sometimes going faster sometimes slower. The ascents that I could run easily at the beginning of the run, now, they were feeling like steep mountain trails, running downhill was better but also painful. Had a few blisters by now and new ones are popping up or at least it felt that way. Had to put some blister tape before the final 16 laps. Clement had finished the race, we congratulated him and kept going to finish before it got too late and dark.